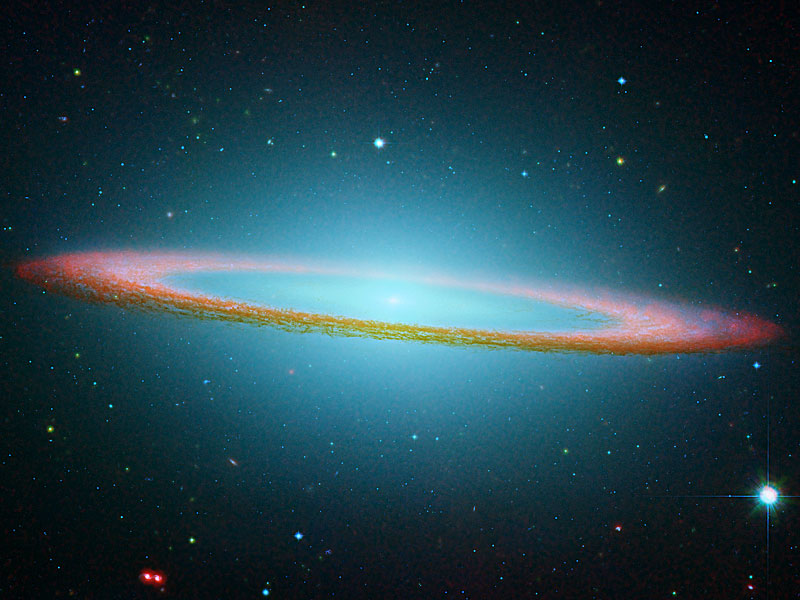 This floating ring is the size of a galaxy. In fact, it is part of the photogenic Sombrero Galaxy, one of the largest galaxies in the nearby Virgo Cluster of Galaxies.

The dark band of dust that obscures the mid-section of the Sombrero Galaxy in optical light actually glows brightly in infrared light.
The below image shows the infrared glow, recorded by the orbiting Spitzer Space Telescope, superposed in false-color on an existing image taken by NASA’s Hubble Space Telescope in optical light.

The Sombrero Galaxy, also known as M104, spans about 50,000 light years across and is located 28 million light-years from Earth at the southern edge of the rich Virgo cluster of Galaxies. Equivalent to 800 billion suns, Sombrero is one of the most massive objects in that group.

The hallmark of Sombrero is a brilliant white, bulbous core encircled by the thick dust lanes comprising the spiral structure of the galaxy.
As seen from Earth, the galaxy is tilted nearly edge-on. We view it from just six degrees north of its equatorial plane. This rich system of globular clusters is estimated to be nearly 2,000 in number which is 10 times as many as in our Milky Way galaxy.

Similar to the clusters in the Milky Way, the ages range from 10-13 billion years old. Embedded in the bright core of M104 is a smaller disk, which is tilted relative to the large disk.
The HST paired with the Spitzer infrared telescope, offers this striking composite capturing the magnificence of the Sombrero galaxy.
In the Hubble view, the galaxy resembles a broad-rimmed Mexican hat, whereas in the Spitzer striking infrared view, the galaxy looks more like a bulls eye.

The full view provided by Spitzer shows the disk is warped, which is often the result of a gravitational encounter with another galaxy, and clumpy areas spotted in the far edges of the ring indicate young star forming regions. Spitzer detected infrared emission not only from the ring, but from the center of the galaxy as well, where there is a huge black hole believed to be a billion times more massive than our Sun.

M104 can be seen with a small telescope in the direction of the constellation Virgo.

► The Sombrero Galaxy in Infrared >> http://go.nasa.gov/2ivw2WM